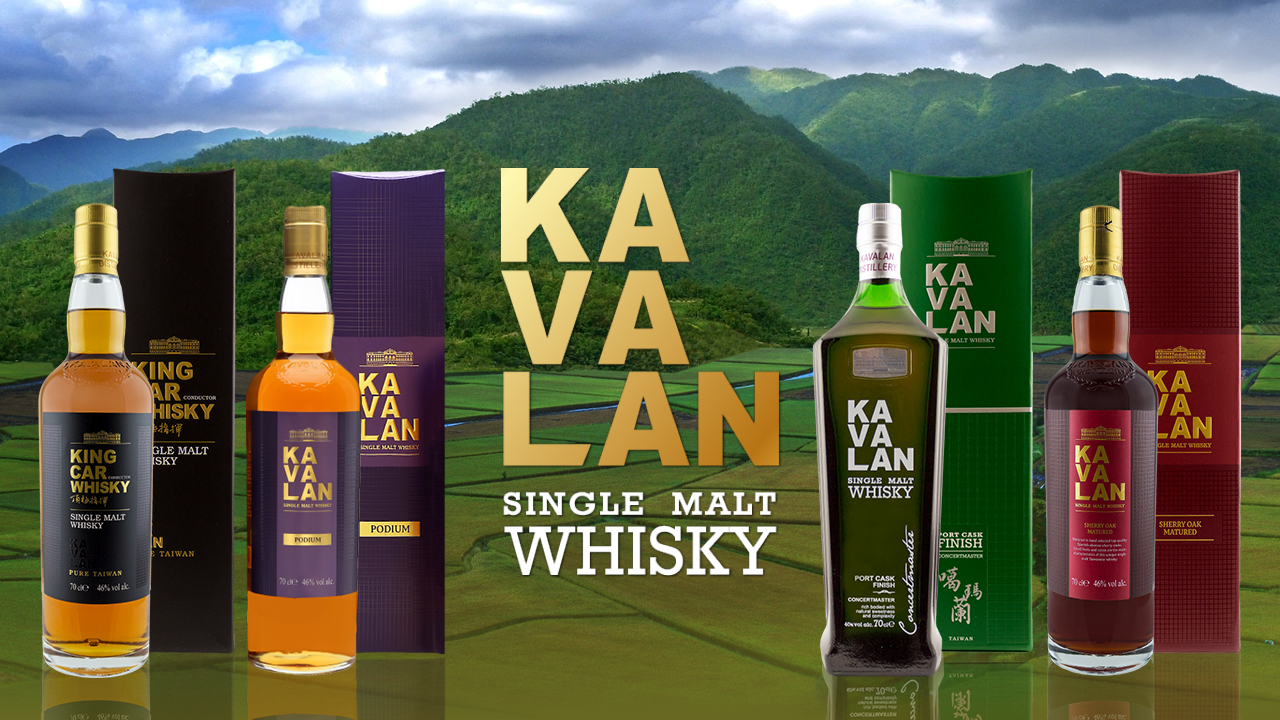 Established in 2005, Kavalan is Taiwan’s first whisky maker and the nation’s only family-owned whisky distillery. A global sensation in just a decade, the brand now produces 18 varieties of whisky with distribution in 60 countries and has won more than 220 international awards.

Kavalan takes the old name of Yilan county where the distillery is located in northeastern Taiwan about two hours away from Taipei, in the town of Yuanshan. The distillery is an entrepreneur’s dream come true. Mr. Tien-Tsai Lee, the founder of King Car conglomerate had long dreamed of producing a Taiwanese whisky, yet it was not until 2002 when Taiwan joined the World Trade Organisation (WTO) that his goal could be achieved. The distillery brings together a professional whisky R&D team with a world-class master blender, Ian Chang, as well as the expertise of renowned whisky specialist, the late Dr. Jim Swan. The team implements the highly specialized distilling and blending skills that King Car Group has cultivated for more than 30 years through beverage experience and knowledge.

The first decade of the brand’s existence was all about achieving quality and consistency, while the next 10 will be focused on global expansion. Working full steam ahead, current production brings the distillery to a whopping 9 million litres per annum capacity, which Chang estimates, ranks them as the ninth largest single malt distillery in the world. The expansion enables Kavalan to continue offering new surprises, but also to help ensure that their whisky will be more readily available for the future.

Kavalan’s’ whiskies don’t carry age statements, although the brand follows a minimum of four years maturation. The whisky develops much faster than its Scottish counterparts due to the sub-tropical Taiwanese climate. When asked how old his whisky is, Chang likes to reply matter-of-factly, “It’s the right age.” Producing whisky in such a hot, tropical climate meant a lot of listening and experimentation in the early days. A specially suited yeast had to be designed, temperature controlled fermenters had to be sourced, and then there's the unavoidable problem of the angel's share – the evaporation of alcohol through the cask as the spirit matures.

The angels get particularly greedy in tropical climates. When maturing whisky in Scotland you might lose around two percent of the total volume of the cask over the course of a year. At Kavalan it's a whopping 10-12 per cent a year, even up to 18 percent when the spirit is matured in thinner ex-bourbon casks.

The positive to this problem is that the spirit resting in these casks matures about three times faster in Taiwan, hence Kavalan's whiskies are matured for less than half the time it takes to mature most Scottish malts. "It's about maturity not age," Chang says, which is why Kavalan put serious effort into securing the best oloroso, fino, port and other wine casks to mature what is a very delicate and fruity distillate. "Every cask is different, and the one benefit to our climate is that we can release our whisky much sooner than other producers around the world."

Outside of the actual ingredients of whisky—barley, yeast, water—Chang pinpoints four additional ingredients which are key to Kavalan’s success. The first is technology which helps provide quality and ensures consistency, which is equally essential. It’s not all about high-tech gadgetry though, it’s more a combination of the best of both science and art. “We think whisky making is a fusion of the two: 70% science with 30% art.” As for the latter, that’s primarily seen in blending, and that’s where Chang himself comes into play.

The next ingredient is climate, and the sub-tropical Taiwanese environment at first provided quite a challenge for Kavalan and their late consultant, Dr. Jim Swan. According to Chang, Dr. Swan helped bring the team to the conclusion of, “Instead of fighting the heat, why not harness it?”

When managed correctly, with the help of technology, the climate allows for highly rapid maturation and signature flavour qualities to shine through. “We think of our heat as a sandpaper and our newly made spirit as a rock with edges,” says Chang, with the goal being to create a smooth sphere. “It helps that our new make spirit is very clean to begin with.”

The right casks are the third ingredient which allow Kavalan to experiment with new releases, each offering distinctive notes picked up from their maturation in unique casks. The Kavalan brand's most popular varieties are matured in sherry casks, making it particularly appealing for those making the leap from wine to whisky.

Lastly is passion; the dedication of the team to always strive forward and improve. “The first thing I think about when I wake up is whisky,” says Chang. That passion was stoked by the late Dr. Swan, who Chang shows the utmost of reverence. “He was a very special gentleman, he’s the person I learned everything from… whether whisky related or just in life,” says Chang. He jokingly refers to Dr. Swan as “my Mr. Miyagi,” while showcasing a photo-shopped movie poster from The Karate Kid morphed into The Whisky Kid, with his and Dr. Swan’s faces in their respective roles.